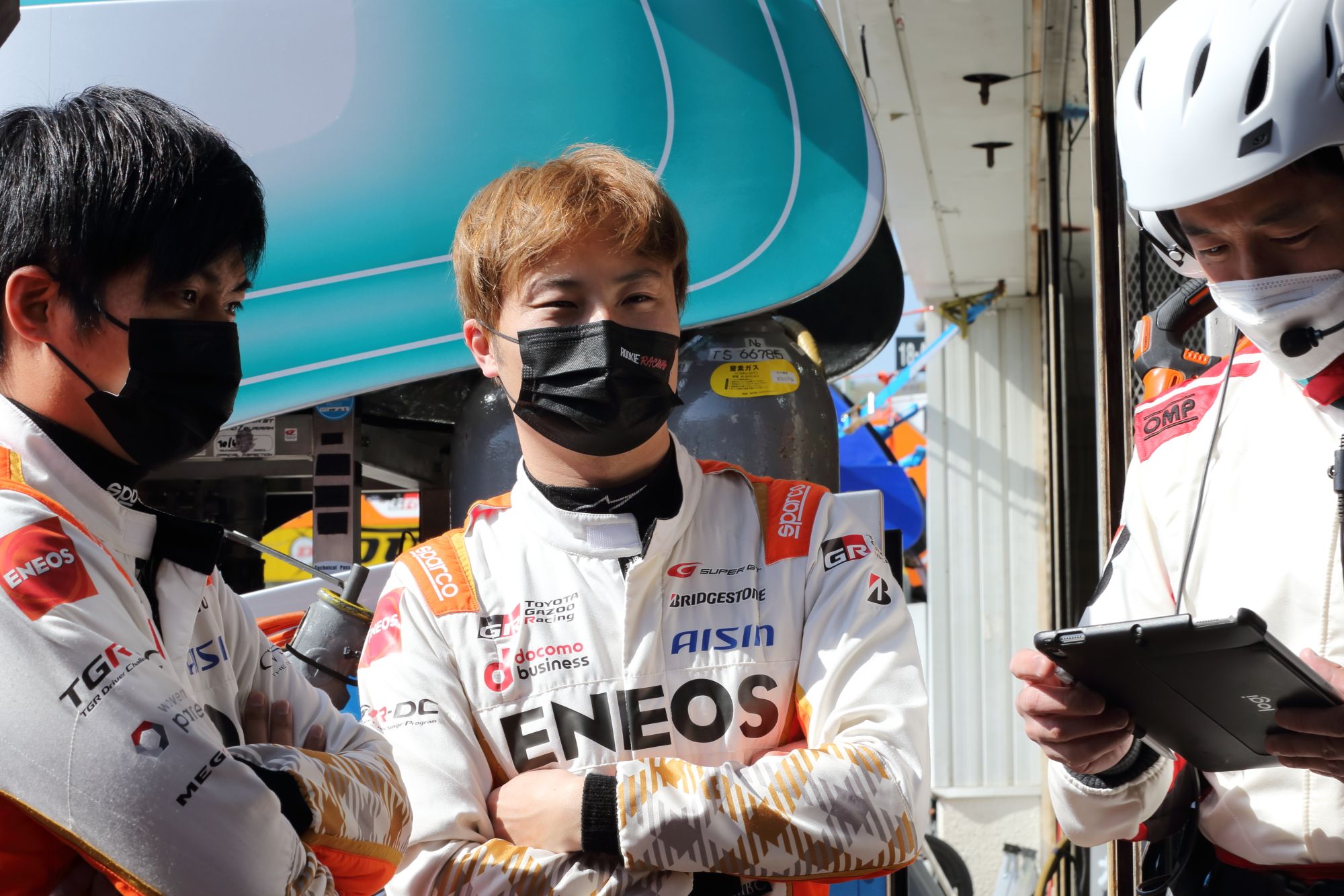 Yamashita suffered an off at 130R at the wheel of his Rookie Racing Toyota GR Supra during the morning session as group testing for the 2023 season kicked off at the Japanese Grand Prix venue.

However, the 2019 GT500 champion appeared to escape any serious injury in the accident, the cause of which remains unclear.

A short statement from Rookie Racing posted on Twitter said that Yamashita "is currently being examined in hospital, but is able to walk by himself and his not in serious condition."

Yamashita's accident brought an early end to the test for the Rookie Supra he shares with Kazuya Oshima, although the car was only scheduled to participate in the opening day of the two-day test.

The team now faces the task of repairing the damaged car in time for the team's next scheduled test outing at Okayama on February 8-9. 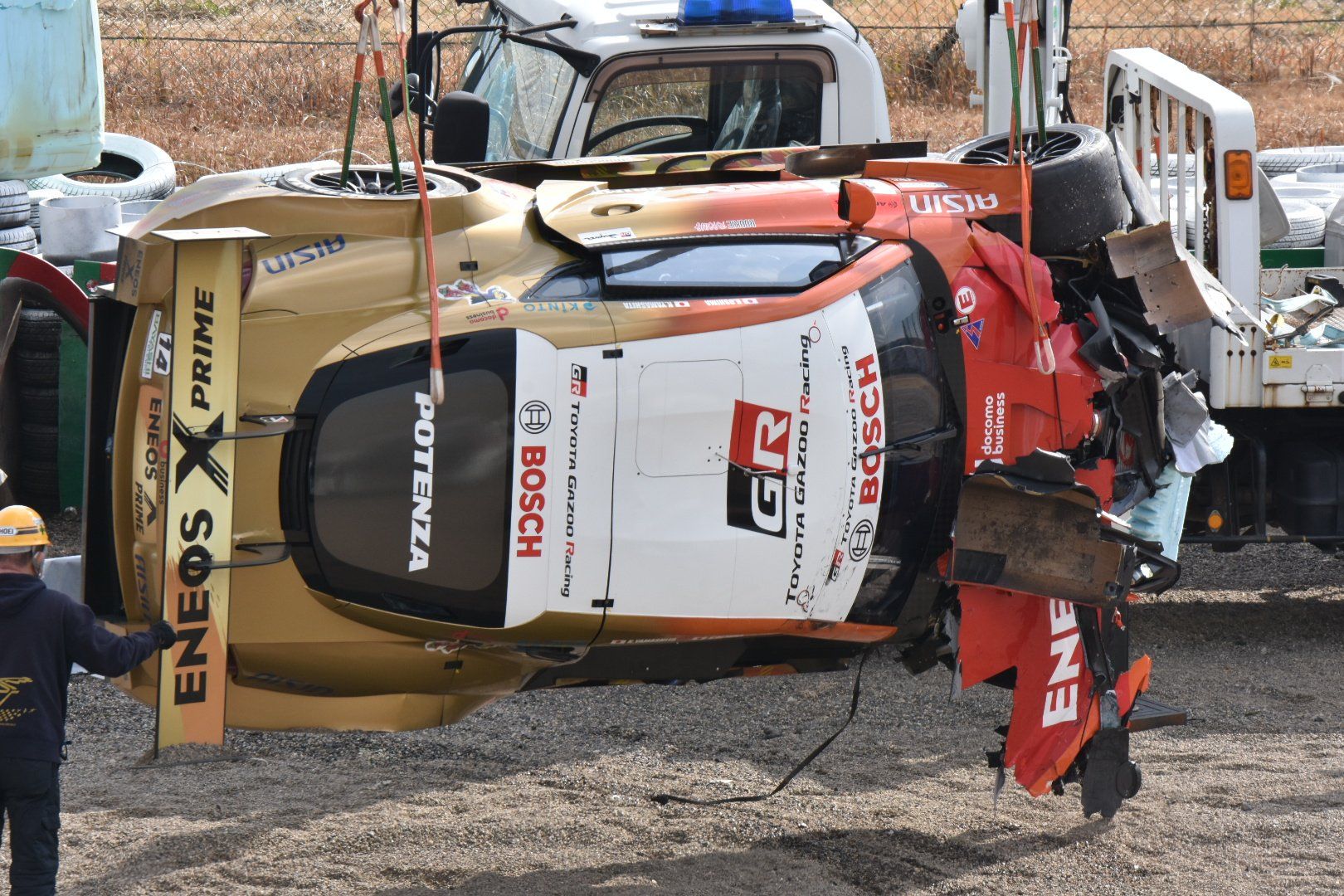 A total of eight cars were on track at Suzuka, with attention focused on Nissan as the only one of SUPER GT's three manufacturers not to have officially announced its driver line-ups.

Nissan had all four of its Z GT500s present alongside a trio of Toyotas, Rookie Racing joined by Cerumo and Racing Project Bandoh, and a single Honda representative in Real Racing.

While Team Impul - proudly wearing the #1 plate following its title success last year - and the two NISMO-run cars ran with unchanged line-ups, the Kondo Racing Nissan appeared to be shared by Daiki Sasaki and Kiyoto Fujinami.

It suggests that Fujinami, a two-time champion in SUPER GT's lower GT300 division with Kondo, is finally set for a promotion to Nissan's GT500 roster, potentially at the expense of Kohei Hirate. Tuesday's test marked the first time that Fujinami has driven a Nissan GT500 car outside of the marque's annual shootout tests held at Fuji Speedway in December. Last month, he was in action alongside fellow youngsters Teppei Natori, Riki Okusa and Atsushi Miyake.

In cold and unrepresentative conditions, it was the Real Racing Honda NSX-GT of Koudai Tsukakoshi and Nobuharu Matsushita that set the pace with a best lap of 1m44.142s in the morning session.

The Yokohama-shod Bandoh Toyota (Yuji Kunimoto/Sena Sakaguchi) was second-fastest on a 1m44.500s, while the Rookie Racing GR Supra had set the third-fastest time before its crash.

Best of the Nissans was the Impul Z of reigning champions Bertrand Baguette and Kazuki Hiramine in fourth.

Testing continues on Wednesday, but forecast temperatures of just one degree Celsius mean any running is likely to be limited and of little value to the teams. 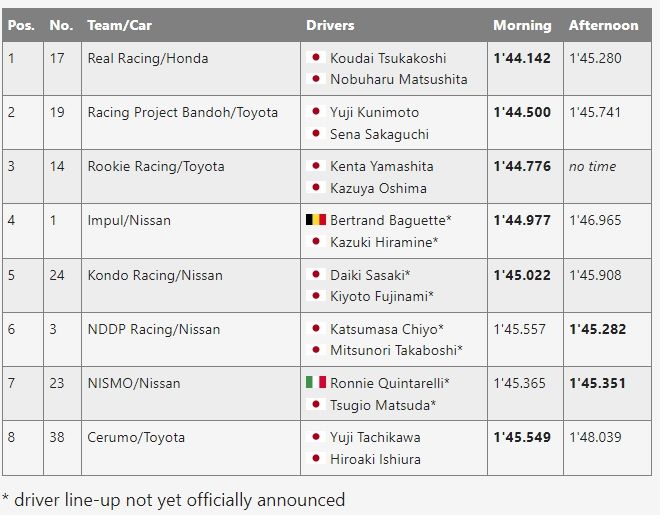