Alex Rins won a last-lap Australian Grand Prix thriller to give Suzuki one more win before its MotoGP exit, as Fabio Quartararo lost the championship lead after a crash. 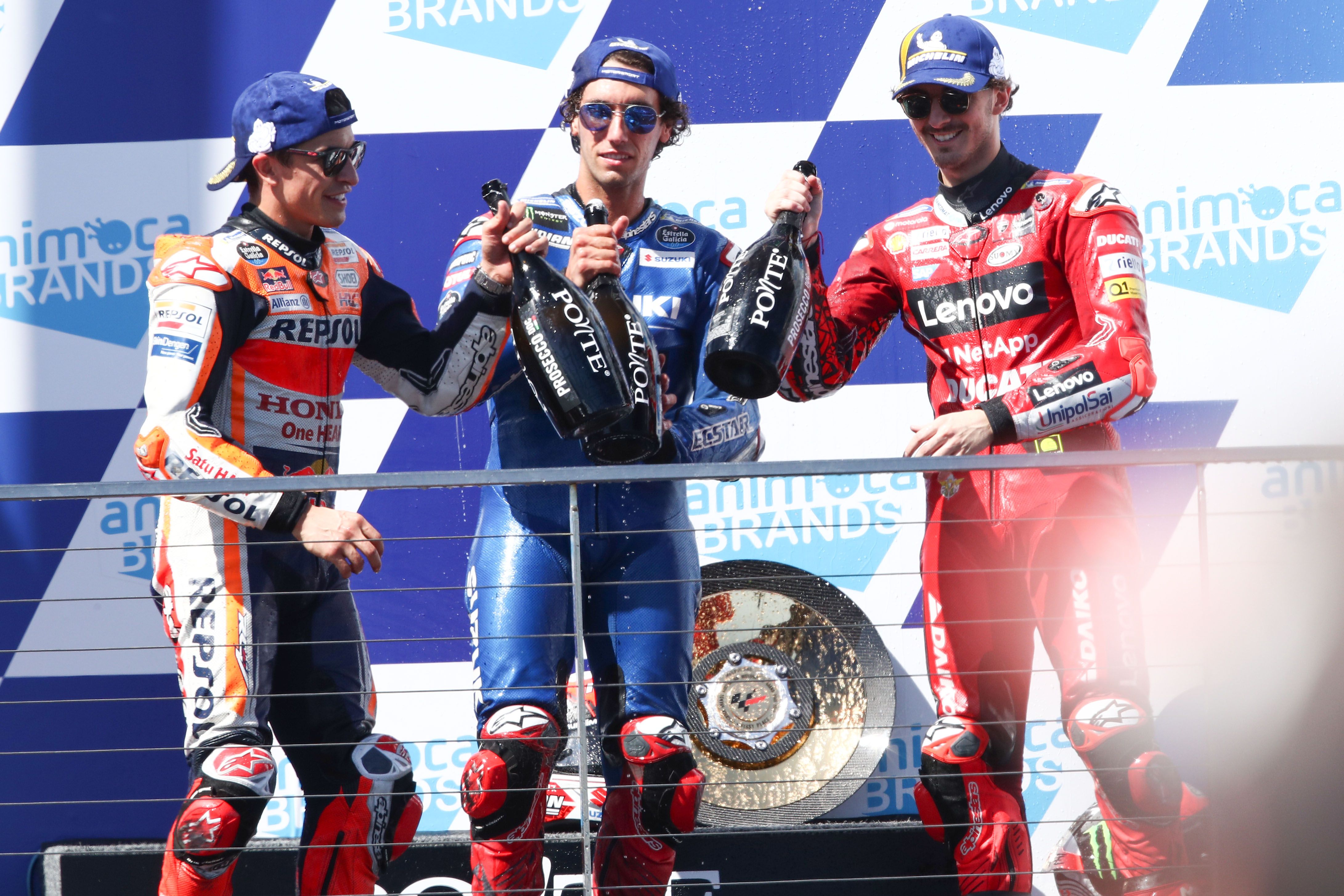 Suzuki made a shock announcement back in May that it would be quitting MotoGP at the end of the 2022 season just two years after it won the world championship with Joan Mir.

From that moment, Suzuki’s season has fallen off the rails. But a stunning ride from 10th on the grid from Rins saw him beat Marc Marquez in a last-lap belter to become the seventh different winner of 2022.

This came after he passed Ducati’s Francesco Bagnaia, who now leads the championship by 14 points after Quartararo crashed out on lap 11 of 27 as he tried to recover from a costly early mistake.

Pramac Ducati rider Jorge Martin converted pole into the lead off the line as Marquez and Quartararo slotted in behind.

Quartararo’s excellent launch from fifth only last two corners, however, as both Bagnaia – who had a poor launch from third after he struggled to engage his ride height devices – and Aprilia’s Aleix Espargaro came through to demote the Yamaha rider.

The erstwhile championship leader would lose fifth to home hero Jack Miller charging through from eighth on his factory Ducati.

VR46 Ducati rider Luca Marini would demote Quartararo seventh using the power of his GP22 to outdrag the Frenchman into Turn 1 at the start of lap six.

Quartararo’s race would become disastrous three corners later when he had a snap under braking into Turn 4 and ran off track, dropping down to 22nd.

He would get himself back into the points in 15th over the next few tours, but would crash out going through Turn 2 on lap 11 when he tucked the front-end of his Yamaha.

Marking his third non-score in four races, Quartararo has now lost the championship lead for the first time since the Portuguese GP.

By the point of Quartararo’s crash, Martin continued to lead but Rins had carved his way through the order from 10th on the grid, having scythed past Aleix Espargaro, Miller and Bagnaia at Turn 2 on successive laps from tours six to eight. 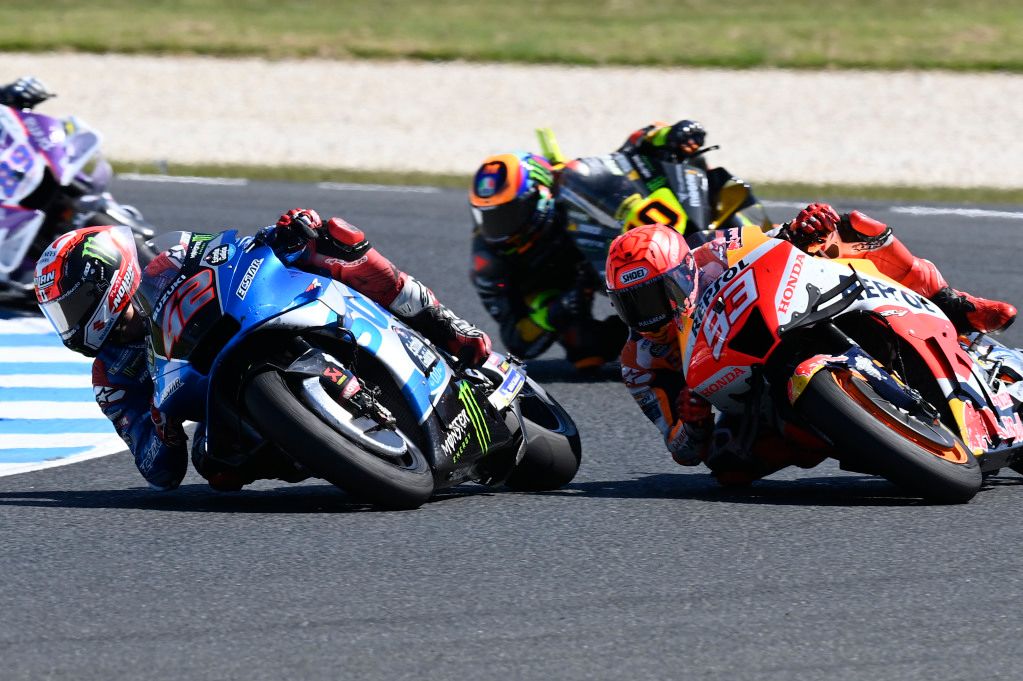 Rins moved ahead of Marquez at Turn 1 on lap 11 before making his first appearance in the lead three tours later after carving up the inside of Martin at Turn 3.

This stint at the front was short-lived, though, Bagnaia came through to the lead on lap 15 at Turn 1 having passed both Martin and Marquez at Turn 4 the lap before.

Rins, Marquez and Martin engaged in a battle for second through to the final lap as Bagnaia was unable to streak clear at the front of the pack.

On lap 20 Rins would briefly retake the lead from Bagnaia at Turn 3, but would be passed again on the following tour, with VR46’s Marco Bezzecchi moving into second soon after.

Rins would get back up to second ahead of Bezzecchi on lap 25, fending off Marquez on the following tour to put himself in a position to take the lead from Bagnaia at Turn 2 on the final lap.

Marquez followed Rins through at the same corner to keep the Suzuki rider in his sights heading into the hard braking of Turn 4.

Rins held firm, running a defensive line into the final hard braking of Turn 10 to ensure he would get to the chequered flag 0.186 seconds clear to claim his fourth win in MotoGP.

Bagnaia missed out on a run to the line to Marquez – who registered his 100th MotoGP podium and the first of 2022 – by just 0.038s to finish third and take a 14-point lead in the standings, as Bezzecchi headed Gresini’s Enea Bastianini – who was 18th in the early stages of the race – in fourth.

That run to fifth has proven crucial for Bastianini to keep his slim title hopes alive, as he is 42 points adrift of Bagnaia with 50 up for grabs still.

Luca Marini completed the top six for VR46 ahead of poleman Martin, whose Pramac team-mate Johann Zarco was eighth ahead of a struggling Aleix Espargaro and the KTM of Brad Binder.

Espargaro fading to ninth has seen him drop 27 points behind in the championship standings, while Miller’s slender chances were ended on lap nine when he was wiped out by LCR Honda’s Alex Marquez at Turn 4 – which was renamed Miller corner this weekend.

Raul Fernandez was 16th on the sister Tech 3 KTM as Maverick Vinales was an anonymous 17th ahead of the recovering Joan Mir on the second of the Suzukis. LCR stand-in Tetsuta Nagashima and Gresini’s Fabio Di Giannantonio were the final finishers.

Franco Morbidelli capped off Yamaha’s miserable day by crashing out on lap 22. 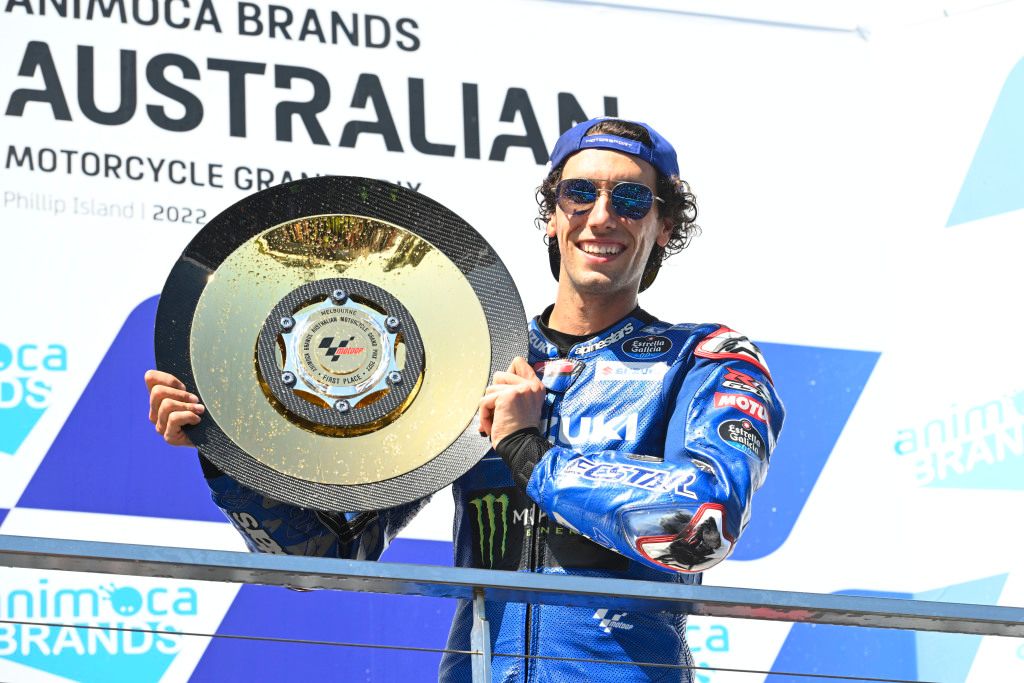