Australia MotoGP: Martin storms to pole with record lap
By Lewis Duncan
Oct 15, 2022 at 6:00 AM
by: motorsport network
MotoGPnews

Pramac Ducati’s Jorge Martin snatched pole from Marc Marquez for the MotoGP Australian Grand Prix with a new lap record, as Francesco Bagnaia was the fastest title challenger in third. 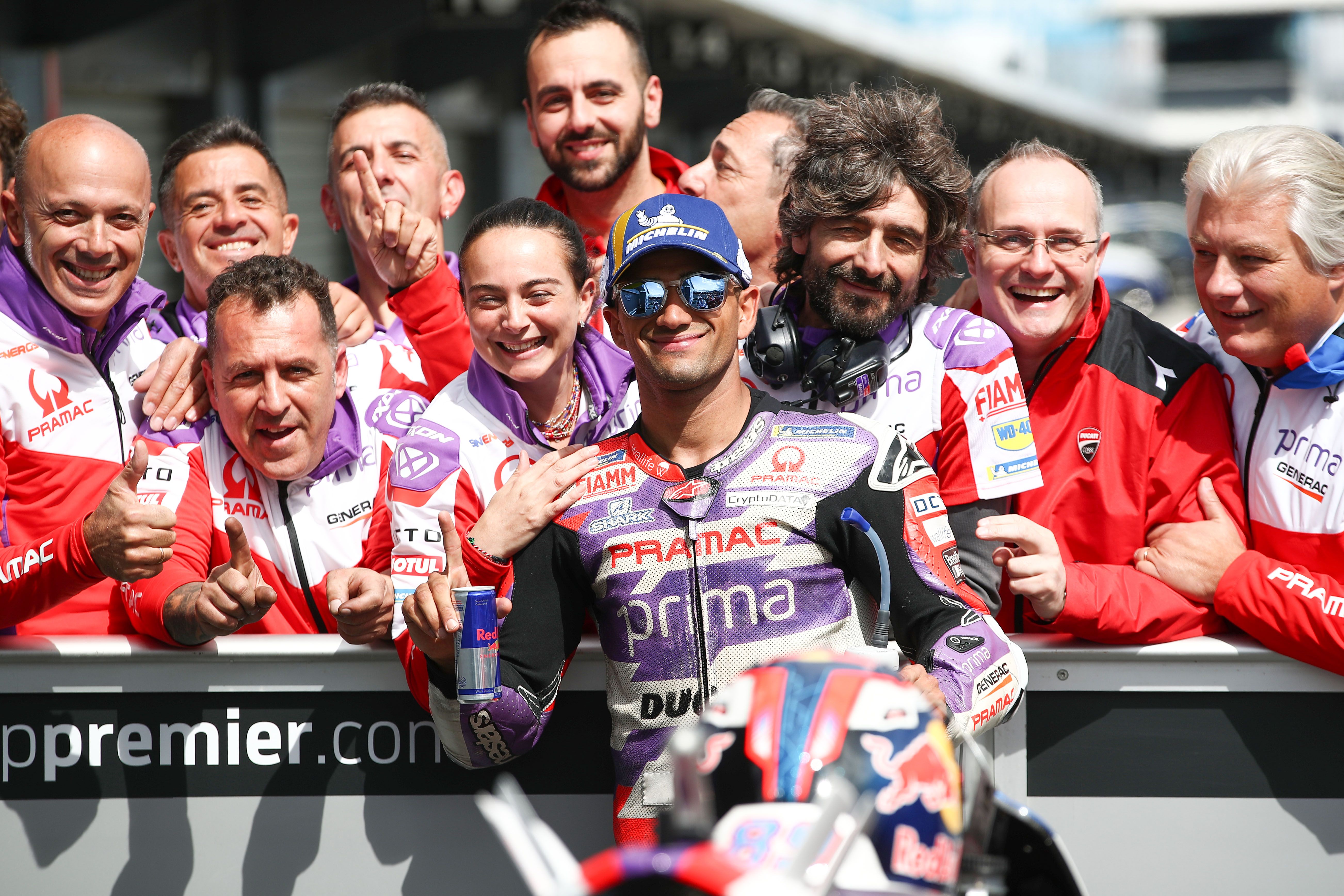 The lap record at Phillip Island has belonged to three-time MotoGP world champion Jorge Lorenzo since 2013, but was finally toppled on Saturday when Martin fired in a 1m27.767s to tally up his third pole of the campaign.

Having never ridden around Phillip Island on a MotoGP bike prior to this weekend, Martin was 0.013 seconds ahead of Marquez as Bagnaia completed the top three ahead of Aprilia’s Aleix Espargaro and championship leader Fabio Quartararo to go into Sunday’s race as the fastest title challenger.

The dry Q2 session began with a frantic series of laps as three Ducati riders took turns setting the pace.

Factory Ducati rider Bagnaia set the benchmark time of 1m28.206s, before Marco Bezzecchi – a track rookie on a MotoGP bike like Martin – edged ahead on his VR46-run Desmosedici with a 1m28.185s.

Martin was quick to shuffle back the pair of them with a 1m28.112s set inside the first four minutes of the 15-minute Q2.

Bagnaia would conclude the first runs of the session with a 1m28.054s to lay down the gauntlet, with Martin 0.058s behind in second.

Across the final laps in the dying stages, session-best sectors were being put in across the timing screens.

But it was a 1m27.767s from Martin with two minutes to go that would win the day, the Pramac rider fending off a charge from Marquez on the Honda by 0.013s.

Marquez offered another glowing sign that his recovery is going in the right direction, as he managed to save a big front-end moment going through the Turn 10 hairpin in the early stages of Q2.

Finding a slipstream from Bagnaia on his final flying lap, Marquez slots in between Martin and the factory Ducati rider for his second front row start in four races.

Aprilia’s Aleix Espargaro was on course to put in a lap that would challenge for the front row in the latter stages as he slotted in behind team-mate Maverick Vinales.

But Espargaro suffered a massive headshake as he blasted out of the final corner onto the pitstraight and had to settle for fourth with a 1m27.957s.

That put him 0.016s clear of Quartararo on the factory Yamaha, with Johann Zarco rounding out row two on the sister Pramac Ducati having come through Q1 with Suzuki’s Alex Rins.

Luca Marini heads row three on his VR46 Ducati ahead of home hero Jack Miller – who had Turn 4 at Phillip Island renamed in his honour earlier today - on the sister factory team GP22 and Bezzecchi.

Rins will start 10th on the Suzuki ahead of LCR Honda’s Alex Marquez and the second of the Aprilias of Maverick Vinales.

Having failed to get into Q2 directly from practice, Enea Bastianini will line up as the lowest placed championship challenger down in 13th.

The Gresini Ducati rider missed out on a spot in Q2 by just 0.038 seconds having been impeded by KTM’s Miguel Oliveira on his final flying lap – an incident currently under investigation by race direction.

Bastianini displaced Honda’s Pol Espargaro late on in Q1, who had been set for a Q2 berth having sat inside the top two spots alongside the returning Joan Mir before both riders elected to abort their final runs.

This leaves Espargaro 14th ahead of Suzuki’s Mir, with KTM’s Brad Binder struggling to 16th ahead of RNF Racing duo Cal Crutchlow and Darryn Binder.

Remy Gardner will start his only home MotoGP appearance 19th on the Tech3 KTM ahead of Gresini’s Fabio Di Giannantonio and Oliveira.