The F1 records Verstappen and Red Bull broke in 2022
By: Sundaram Ramaswami
Nov 22, 2022 at 7:00 AM
by: motorsport network
Formula Onenews

Max Verstappen and Red Bull produced a record-breaking 2022 Formula 1 world championship, but exactly what records did they set and how did it compared to previous seasons? The curtain has fallen on Formula 1’s 73rd season, and it truly has been a spectacular one. Verstappen was crowned the drivers’ world champion for the second straight year, while Red Bull took top honours in the constructors’ championship after a lengthy gap.

But just how dominant were they from a numbers perspective? Let’s take one last look at the records Verstappen and Red Bull broke this year before we turn the page onto 2023.

The big one straightaway, and the one that hadn’t been broken in close to two decades. Michael Schumacher scaled new heights in 2004 by winning 13 races in one year, becoming a seven-time world champion in the process. After nine years, it was Schumacher’s protege and fellow German Sebastian Vettel who matched the record in his most dominant season in Red Bull colours in 2013.

A further nine years later, Verstappen surpassed both legends in Mexico and set a new benchmark of 15 victories in one year at the season finale in Abu Dhabi. Ferrari’s various troubles through the season, along with Mercedes’ struggles with their car concept and porpoising only aided Verstappen in reaching that milestone.

That record stood until Verstappen broke it this year with two rounds to spare. The Dutchman finished the season with a whopping 454 points and one may wonder if that’ll ever be broken. But with 2023 having two more races and three additional sprints compared to this year, you just never know. 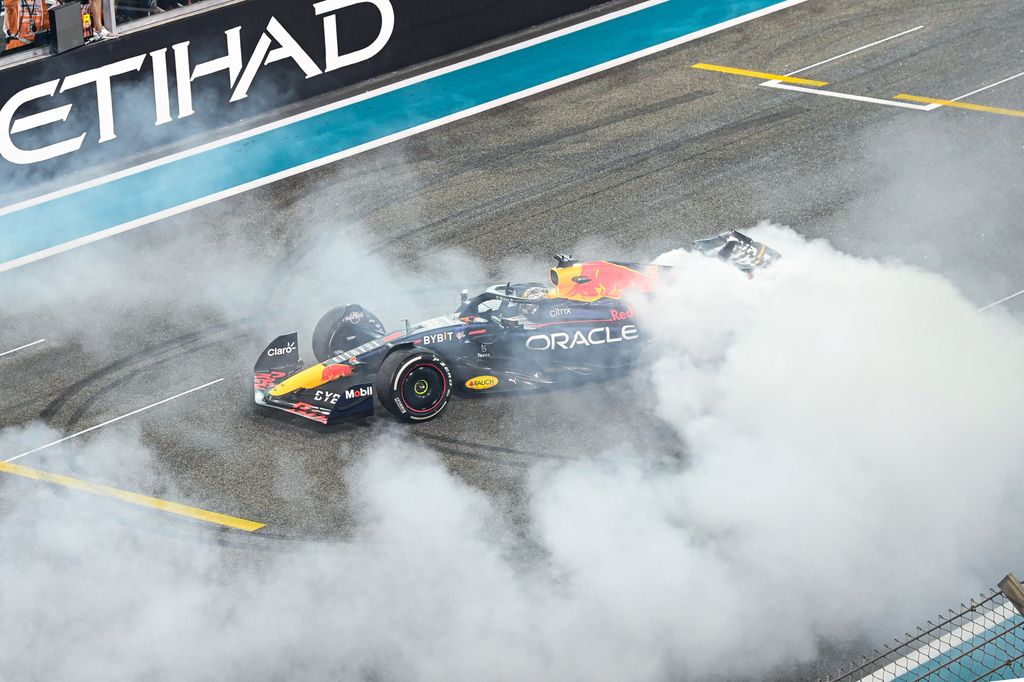 Courtesy of two DNFs in the opening three races, Max Verstappen found himself sixth in the standings after the Australian GP, 46 points behind championship leader Charles Leclerc. In a matter of three races, not only did the Dutchman eat into Leclerc’s advantage, he displaced the Monegasque from the top of the table by the Spanish GP. Verstappen never gave up his lead thereafter and sealed the title at Suzuka, thus taking the record for the biggest points gap overhauled to become champion.

Sebastian Vettel was the previous holder of the record who usurped Fernando Alonso’s lead of 44 points over six races in the second-half of the ultra-competitive 2012 season.

4. Wins from the most different grid slots in a year - 7

As if claiming 15 victories in a year wasn’t enough, Verstappen went one further by winning from seven different starting positions in 2022. Prior to this season, the Dutchman had never won from outside the top four on the grid. But he put that stat to rest by winning from 10th at the Hungarian GP, which also included a rare spin while trying to catch the leaders.

At the very next race in Belgium, Verstappen was forced to start from 14th after collecting grid penalties for exceeding his allocation of power unit elements. That, however, didn’t stop him from climbing up the order and becoming just the second driver in F1 history - alongside Bruce McLaren - to win consecutive races from 10th or lower. Two races later, he was at it again winning the Italian GP after starting the race from seventh. Before Verstappen, the record belonged to Alan Jones (1980), Alain Prost (1990), and Kimi Raikkonen (2005) who had won from five different grid slots in those years.

5. Most wins in a season outside pole position - 9

If Red Bull became the masters of Sunday, Ferrari was the team to beat on Saturday. The Maranello-based squad took pole position in 12 of the 22 races this season, their joint-highest ever in a year.

But that didn’t deter Verstappen, as he recorded nine wins in 2022 when not starting from pole position, a feat never achieved before. He claimed the record at the US GP as he went past Schumacher’s (seven) and Hamilton’s (eight) tally which they set in 1995 and 2019 respectively. 1. Most consecutive finishes in the top two - 19

For years Red Bull tinkered with their line-up, trying to find the ideal pair that would replicate the success of Sebastian Vettel and Mark Webber. It seemed they had finally found it, as they came within 28 points of winning the constructors’ title in 2021. They turned it up a notch in 2022, with Verstappen and Sergio Perez racking up 17 and 11 podiums respectively, eventually taking the championship after eight long years.

The peak of their consistency saw them finish either P1 or P2 in 19 consecutive races (from Saudi Arabia to Mexico), a record in itself. The previous record was of 17 straight races set by Williams in 1993-1994 and Mercedes in 2014-2015.

The ones that got away

2. Most wins in a year by a constructor

3. Most points in a year by a constructor

Sundaram Ramaswami, also referred to as the F1 StatsGuru, is a Formula 1 statistician and social media content creator.