Mercedes and Aston Martin tech innovations banned for F1 2023
by Jonathan Noble
Nov 25, 2022 at 7:30 AM
by: motorsport network
Formula Onenews

Two extreme aero ideas introduced by Mercedes and Aston Martin this year have been banned for the 2023 Formula 1 season. 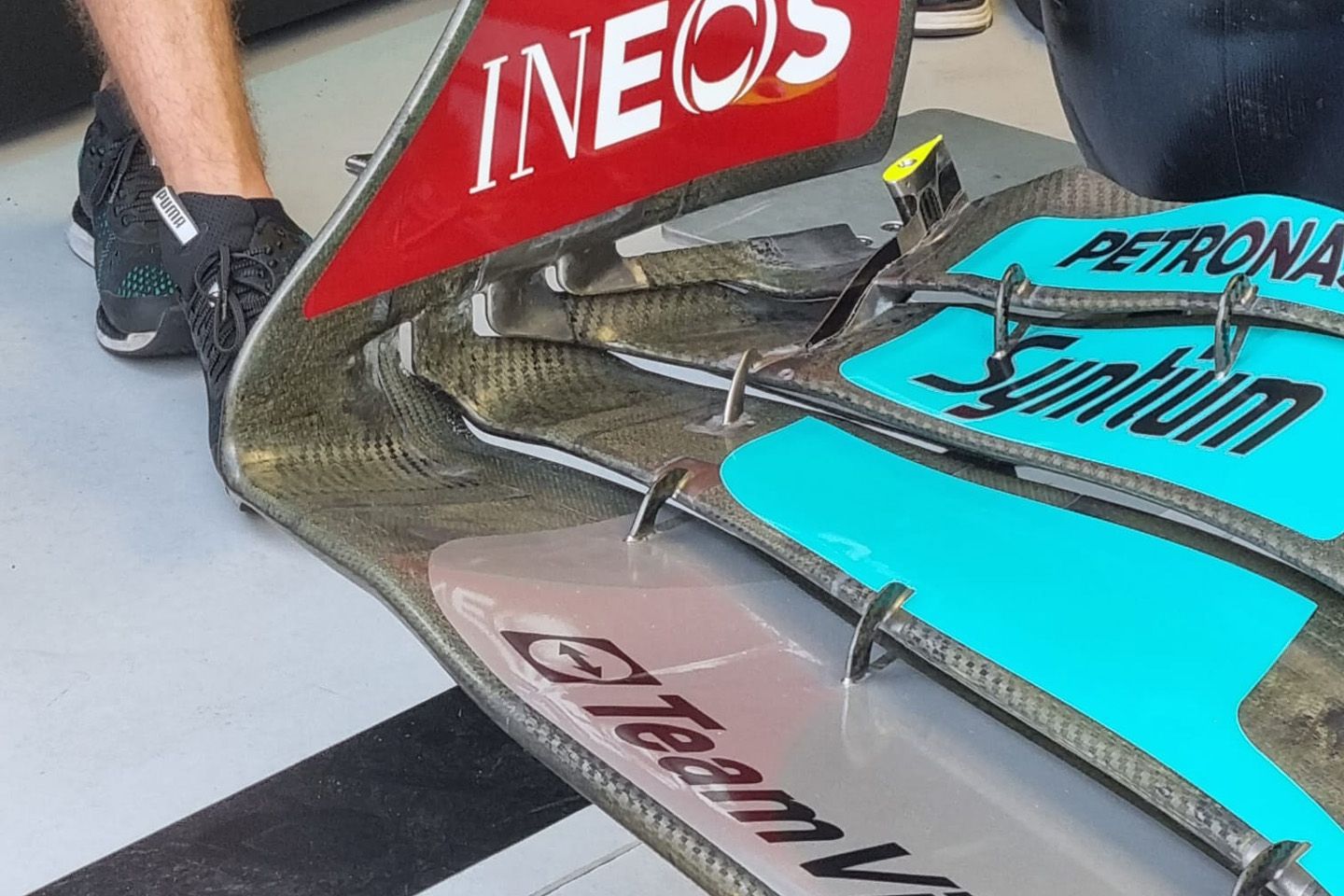 The innovative concepts, involving the Mercedes front wing endplate and the Aston Martin rear wing, have been made illegal through changes in F1's technical regulations.

Both concepts raised eyebrows when they were introduced because, while fully complying with the wording of the rules and being deemed legal by the FIA, they appeared to go against a broad concept that car designs to increase performance did not make it harder for cars to follow each other.

Mercedes' radical front wing endplate first appeared at the Miami Grand Prix and featured a unique design in the intersection between the flapped section and the endplate.

This was done in order to try to recoup some of the outwash that was lost with the new regulations.

The flaps had been swept forward very aggressively in the outer section, so the rear lower edge of the endplate was completely detached from the flaps.

Meanwhile, Aston Martin came under the spotlight at the Hungarian Grand Prix when it introduced a rear-wing design that appeared to break one of the key intentions of the 2022 rules.

Its design featured a unique arrangement on the front portion of the endplate that allowed the main plane to butt up to it in a more traditional way, thus increasing its span and the downforce that can be generated.

The new regulations had hoped to bid farewell to the traditional endplate and wing interaction of the past, with a curved transition between the elements.

This was designed to reduce the strength of the tip vortex, thereby limiting airflow disruption and helping in the overall goal of making it easier for cars to follow one another.

While the FIA was happy with both concepts to allow them to be used this year, formal tweaks have been made to the 2023 technical regulations to ensure that the grey areas that allowed them have been tidied up.

The FIA's single-seater technical director Nikolas Tombazis said: "Obviously this year they were both legal. The regulations have changed on both the front and the rear in different ways to stop those solutions."

This has been done through alteration of the rules that are now stricter regarding the sweeping back of front wing flaps, as well as being more specific about rear wing tip definitions. Despite the Aston Martin idea now being banned, its performance director Tom McCullough said he was still proud of the fact that his team had created something so bold amid the restrictive 2022 rules.

"I think what was nice this year is the fact that we came up with something novel and new," he said when asked by Motorsport.com for his thoughts on it getting outlawed.

"It was a very difficult interpretation of the rules that added performance to our car. It was a part that people couldn't just copy quickly because of how complicated it was to get around several different regulations.

"So in a way, we've sort of had that advantage this year because, by the time we brought it to Budapest, it's quite late for people to react to understand it and, from the cost cap [perspective], they had already made their high downforce wings. So for me, I was really happy.

"A lot of people were involved in that project for a long time, many months in the toing and froing between the FIA. But I understand: our job is always to make the most of the regulations and, if they change, we have to adapt to that really." Tombazis has made it clear that, while there is wording within the rules that prevent teams from introducing designs that hurt the racing, the FIA will always go through the proper regulatory processes to close down such possibilities.

This means discussing it with teams, and going through the F1 Commission and FIA's World Motorsport Council to make changes for subsequent seasons.

Article 3.2.1 of F1's Technical Regulations states: "An important objective of the Regulations in Article 3 is to enable cars to race closely, by ensuring that the aerodynamic performance loss of a car following another car is kept to a minimum. In order to verify whether this objective has been achieved, Competitors may be required on request to supply the FIA with any relevant information."

Asked if the changes for 2023 were prompted by concerns about the designs hurting the racing, Tombazis said: "Some of these things where we changed the rules are in that category.

"But that article [3.2] wasn't intended that: 'Okay, if you're smart and you have a solution, we're going to take it off the car immediately.' It just gave an explanation about sometimes why we have to intervene with the regulations.

"But we've still done it via governance. We don't have the right to just say: we don't like this, let's ban it."

More:Formula One, Mercedes, Aston Martin
Nov 25, 2022 at 7:30 AM
by: motorsport network
latest news
all news