Formula 1 sets foot in Jeddah for the penultimate round of the 2021 F1 season, the inaugural Saudi Arabian Grand Prix. With the curiosity of a brand new venue coupled with the possibility of a new champion being crowned, the race is certain to attract attention from millions around the world. So here are all the stats and numbers to watch out for ahead of this weekend.

Saudi Arabia is slated to become the 34th country and fourth Arab one (after Bahrain, the United Arab Emirates and Qatar) to host a Formula 1 race. Having also hosted the Diriyah ePrix previously, it will be the 16th nation and first one in the Middle East to host both Formula E and Formula 1 championships. The country has been making immense strides in the tourism sector off lately and has welcomed other motorsport events such as the Race of Champions, the Dakar Rally and Extreme E in recent years.

The venue for the event, the Jeddah Corniche Circuit, is a spectacular-looking venue built on the shores of the Red Sea. Almost 1000 kms away from the capital city of Riyadh, the circuit was built in a record timeframe of eight months and is all set to be the 76th different circuit to stage a championship round. The track was conceptualised by Carsten Tilke (son of Hermann Tilke) along with Ross Brawn (Formula 1 managing director).

Boasting a length of 6.174 km, it is the second-longest circuit on the calendar after Spa-Francorchamps. The first freshly-built track Formula 1 has raced on since Baku, Jeddah also displaces the Azerbaijan venue as the longest street circuit in the sport. Lap times are expected to be within the 1m 27s to 1m 33s range with a blistering average speed of 252.8 kph. That average speed is a shade faster than Silverstone (251.6 kph) and is second only to the ‘Temple of Speed’, Monza (264.4 kph). Compared to other street arenas, it leaves behind Albert Park (237.2 kph) and Baku (215 kph) by a fair distance. With an expected top speed of 322 kph, it is aptly titled the fastest street circuit in Formula 1 and will have drivers experiencing gravitational forces upwards of 4.8G. 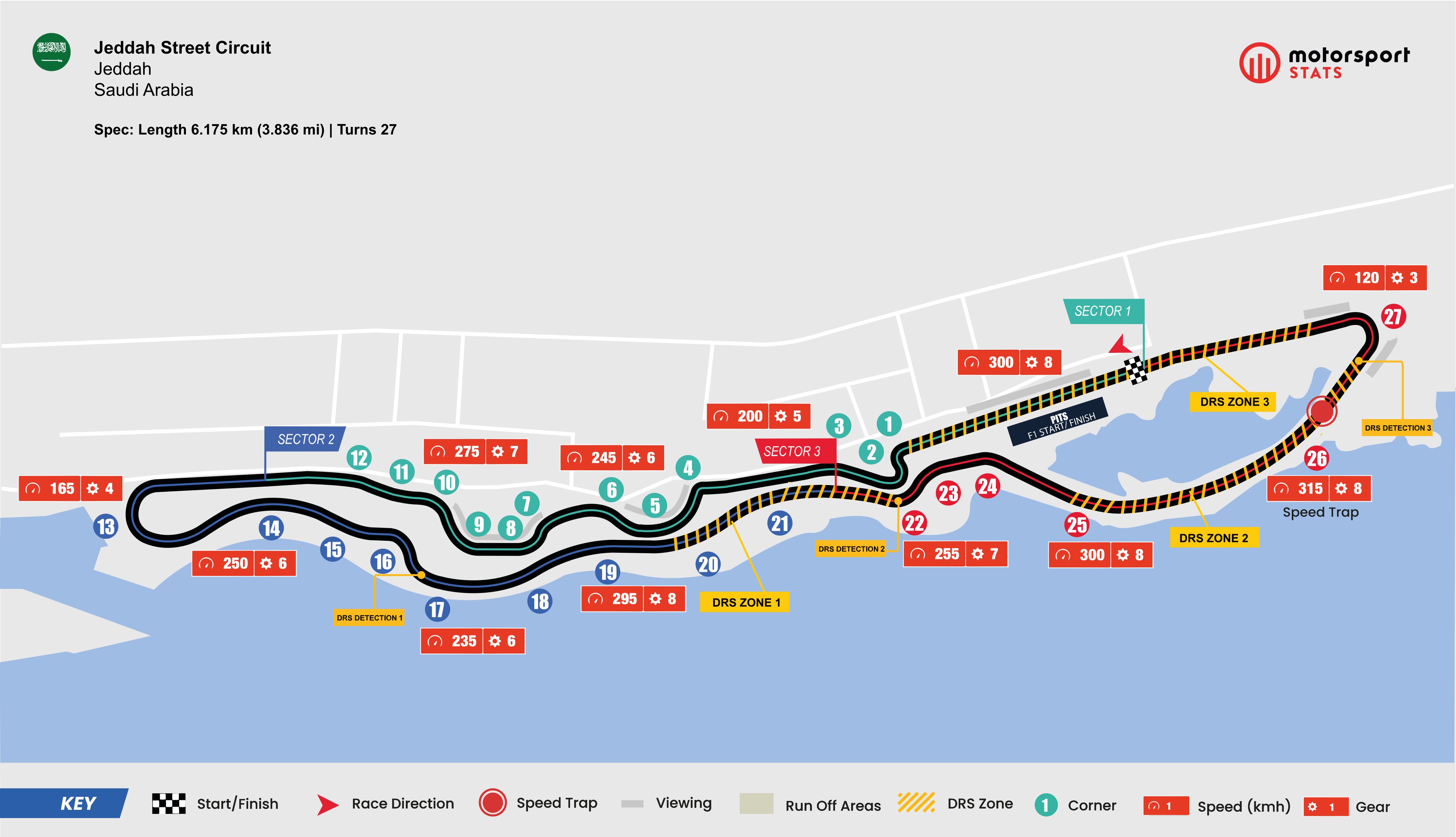 As if the speed and distance weren’t challenging enough, Jeddah also has the most corners amongst active circuits - 27. That is four turns more than Singapore and almost thrice the number of corners than the Red Bull Ring (10). In addition, Turn 13 is banked at 12 degrees, three more than Indianapolis and seven down on Zandvoort. The banked corner will allow for different racing lines moving into the next section of fast-flowing corners, as seen in the Dutch Grand Prix as well. Jeddah is also one of the four venues this year, after Sakhir, Spielberg, and Mexico City to have three DRS zones which is expected to provide plenty of overtaking opportunities over 50 laps.

The third race out of four to be held under lights this year, Jeddah will have a staggering 627 light poles illuminating the track. Interestingly the Saudi Arabian Grand Prix is also the only event this season that will start half past the full hour. 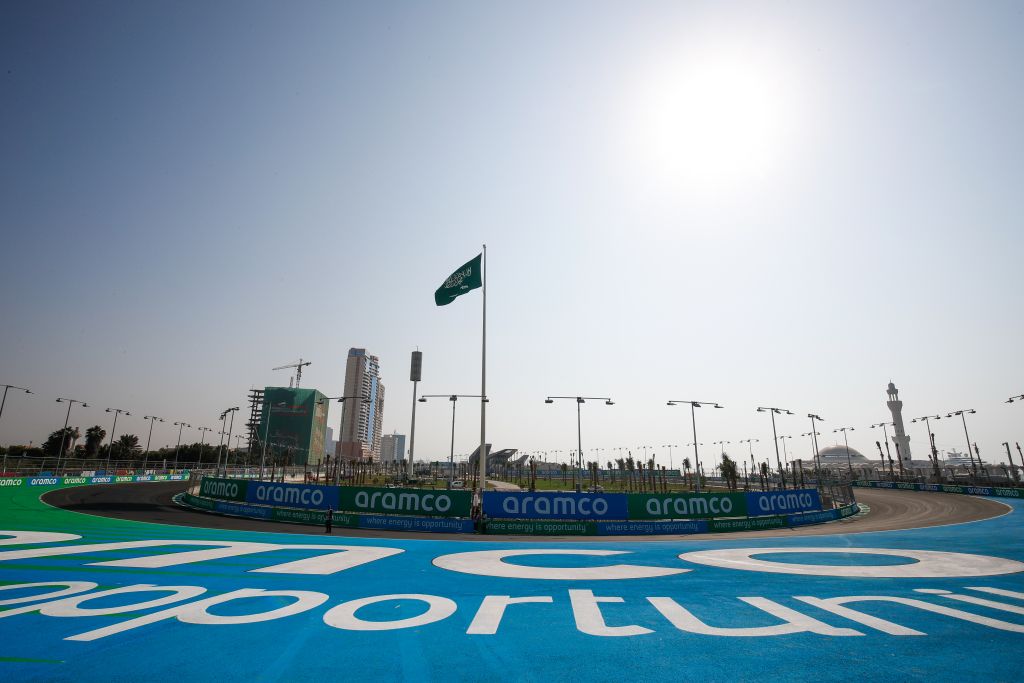 Having won the previous two rounds, Mercedes and Lewis Hamilton walk into the event as firm favourites. The Silver Arrows will also bank on Hamilton’s night-race form this weekend, as the Brit has won 15 of the 34 Formula 1 races held under lights. In comparison, his title rival Max Verstappen has won just one. If Mercedes come out triumphant on Sunday, it’ll be the first time they’d have won three races on the trot in 2021. It will also continue their streak of winning the first race at every new venue in the hybrid era.

With just eight points separating Verstappen and Hamilton, this is the closest championship gap going into the penultimate round of the season, ever since the new points system was introduced in 2010. Nevertheless, Verstappen has a mathematical chance of winning the title at Jeddah and needs to collect 18 points more than Hamilton on Sunday. If he does so, he’ll become the fourth-youngest champion in F1 history (after Sebastian Vettel, Lewis Hamilton and Fernando Alonso) and the first one from the Netherlands. It could also be the first time the drivers’ championship has been sealed at a new venue since the 1987 Japanese Grand Prix.

The Dutchman has stood on the podium in 16 of the 20 races so far and could topple Michael Schumacher, Sebastian Vettel and Lewis Hamilton (all 17) for the most podium finishes in a year if he makes it to the rostrum in the last two races. Elsewhere, Carlos Sainz could become the owner of an unwanted record this weekend. He’s just four points shy of surpassing Nico Hulkenberg for the most points in Formula 1 without a race victory.

The championship enters the month of December for just the sixth time in 72 years (1959, 1962, 1963, 2019, 2020 and 2021). The most recent drivers to win in the last month of the year are Lewis Hamilton (Abu Dhabi 2019), Sergio Perez (Sakhir 2020) and Max Verstappen (Abu Dhabi 2020). Interestingly, no driver has won a race in December on more than one occasion. It will certainly be an interesting sight to see if that trend continues this weekend as well.