As if the 2021 season wasn’t dramatic enough already, it reached newer heights at the Saudi Arabian Grand Prix. The dizzying Jeddah street circuit brought numerous crashes and incidents along with it, but the most tense ones were at the front between the title rivals. Lewis Hamilton, in a bruised car, eventually came up trumps against Max Verstappen to take a third successive victory. A race that is certain to be spoken about long into the off-season, here’s the stats review to highlight all the interesting numbers it churned out.

Lewis Hamilton took his 103rd career victory and has now won on 31 different circuits in Formula 1. It was the first time Mercedes and Hamilton have won three races in a row since Imola-Istanbul-Sakhir in 2020. Valtteri Bottas stood on the podium in his 100th race start, and penultimate one, for Mercedes. Hamilton and Nico Rosberg are the other two drivers to complete a century of races for the Silver Arrows, and coincidentally, they also finished on the podium in their 100th appearance for the team. Bottas' late drag race with Esteban Ocon to snatch the final podium spot evoked memories of his dash against Lance Stroll at Azerbaijan in 2017. With Sergio Perez crashing out of the race, Bottas secured third place in the drivers’ championship. However, his tally of 218 points so far is his lowest in a season since joining Mercedes in 2017. Max Verstappen and Lewis Hamilton’s strong form meant Bottas has managed to take just one P2 finish this year, at the Austrian Grand Prix. 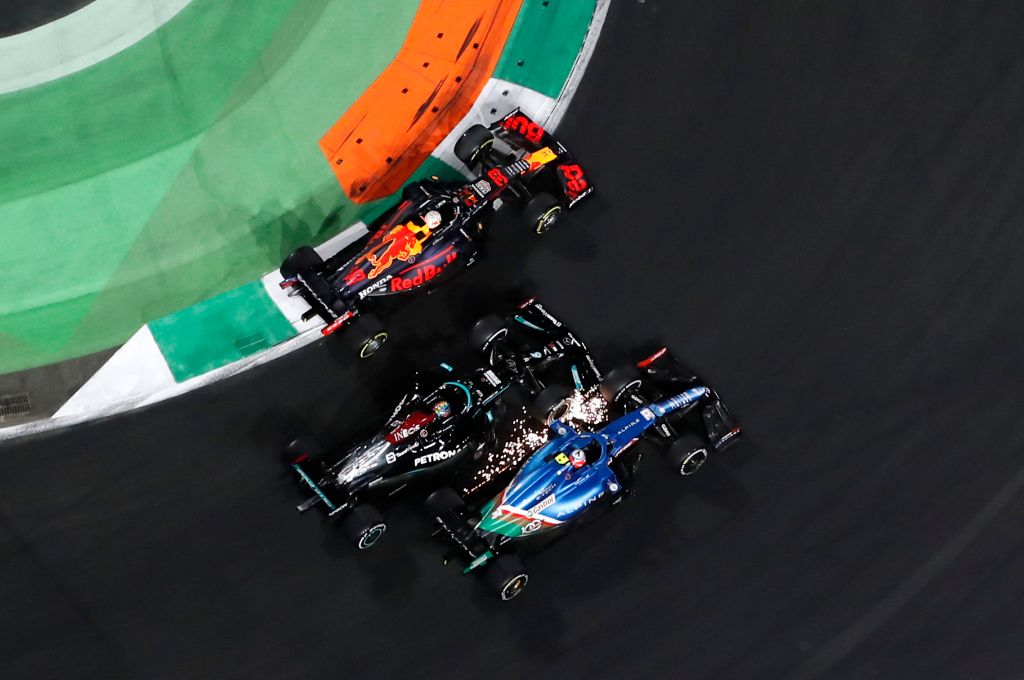 Mercedes now have a 50% win rate in Formula 1 after the Saudi Arabian Grand Prix, the highest win percentage achieved by any constructor. Their former outfit, Brawn GP, come in a close second with 47.06% of their races won, although they participated in just one season. Mercedes’ record of winning the first race at every new venue in the hybrid era continued on Sunday, with the Miami race in 2022 the next target in that impressive streak.

Jeddah was the 27th different circuit at which both Max Verstappen and Valtteri Bottas finished on the podium. The Dutchman also tied the single-season record of 17 podiums and could emulate Michael Schumacher, Sebastian Vettel and Hamilton at Abu Dhabi for the overall record. It was Verstappen’s 59th podium in the sport, equalling former champion, Nigel Mansell’s tally. Mansell was 41 at the time of his last podium, whereas Verstappen is just 24 with a long career still ahead of him. Only Hamilton (111) and Bottas (61) have had more podiums since Verstappen's debut in 2015. The Red Bull driver has led 651 laps this year, placing him fifth in the all-time list for laps led in a single season. Completing 44 laps at Abu Dhabi would catapult him to second, only behind Sebastian Vettel who led a whopping 739 laps in 2011. 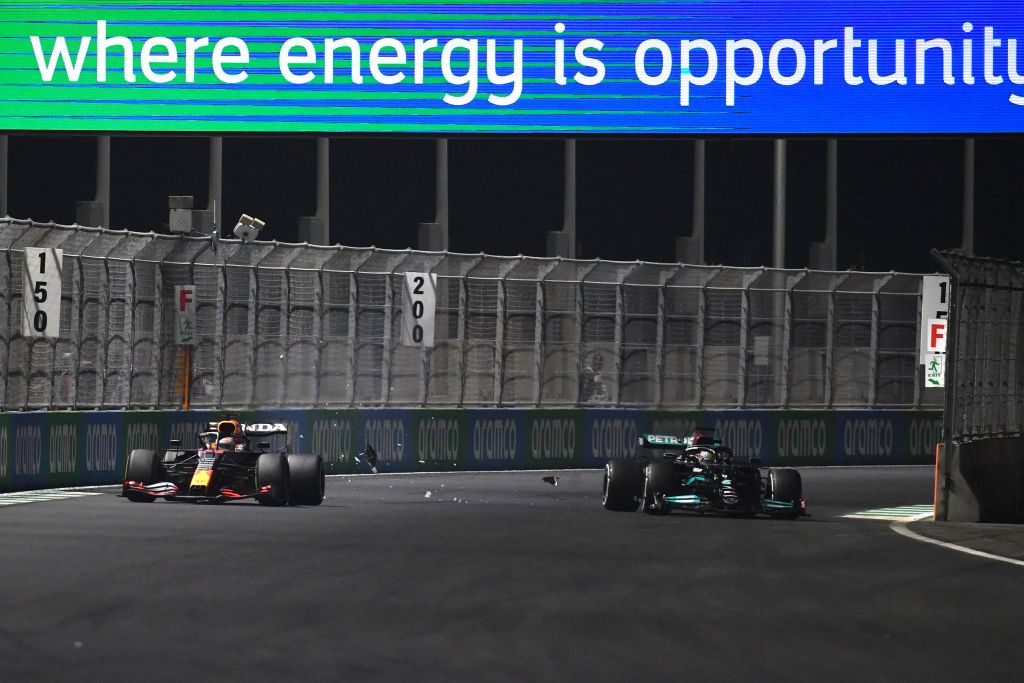 Esteban Ocon has made steady progress recently and has finished in the top five in his last two races. The Frenchman would have clinched P3 for the first time if not for Bottas’ late charge in the dying moments of the race. Carlos Sainz’s four points took him atop the list for most points in Formula 1 without ever winning a Grand Prix. Having completed every race since the 2020 Eifel Grand Prix, he’s only the seventh driver to finish 28 races in a row.

McLaren’s Daniel Ricciardo took P5 after three fruitless races outside the points. His previous six points-finishes have all been top-five results. His teammate, Lando Norris, was unlucky to get caught out during the red flag interruption having pitted earlier and ended the race in tenth. Norris' only top-six finish in the second half of the season was at Monza behind Ricciardo. Yuki Tsunoda's coming together with Sebastian Vettel meant the onus was once again on Pierre Gasly for a strong race result. His P6 was his eighth top-six finish in 2021. The Frenchman reached the century-mark of points for the very first time in his Formula 1 career. AlphaTauri are currently at 120 points, the highest points tally they have achieved in a season.

Antonio Giovinazzi came 9th in his penultimate race for Alfa Romeo, his joint-best result since Austria 2020. The outgoing driver has now finished 24 races in a row, the second-longest active streak this year. The most consecutive finishes by a Sauber driver is 33, achieved by Nick Heidfeld between 2007 and 2009. Nikita Mazepin ran into the back of George Russell’s Williams after the restart, which forced both drivers to end their race prematurely. Mazepin and Russell now have the most retirements this year with five DNFs apiece. Sainz and Giovinazzi are the only full-time drivers yet to suffer a race retirement this year. This is also the first time that both Haas drivers have failed to see the chequered flag since the 2020 Turkish Grand Prix.

All the chaos meant interruptions were more or less certain, thus making it just the fifth race in Formula 1 history to be red-flagged twice. A visibly miffed Verstappen shared the rostrum with Hamilton and Bottas for the 20th time, six more than any other trio has ever done. Hamilton P1 and Verstappen P2 is also now the joint-most recurring 1-2 finish in Formula 1 alongside Michael Schumacher-Rubens Barrichello and Lewis Hamilton-Nico Rosberg.

The season sits at a very exciting juncture with Verstappen and Hamilton both on 369.5 points. It is just the second time in Formula 1 history that the title rivals are tied on points going into the final race of the season. The only other time it occurred was in 1974 when Emerson Fittipaldi and Clay Regazonni were equal on points before the season finale in the USA.