The first Formula 1 Sao Paulo Grand Prix or the 38th F1 Grand Prix held at Interlagos was eventful throughout the whole weekend and ended in an another tense battle between the two championship protagonists. Luckily this time it did not end at the side of the track but both drivers finished on the podium as Lewis Hamilton (Mercedes) beat Max Verstappen (Red Bull);  it was the 12th time this season they stood together on the podium.

Sprint Qualifying (Race)
The 4309m long Interlagos track was also the place for the third Sprint Qualifying race of the season which would determine the grid order for Sunday’s Grand Prix. In the qualifying on Friday it was Lewis Hamilton who was fastest but after a technical inspection of the rear wing of his car, it was found illegal. The front wing issue meant a disqualification from qualifying and Hamilton would start last and so pole position for the Sprint went to Max Verstappen, for Verstappen it was the first he would start from Pole in a Sprint race. The 24 lap Sprint race would not shake up the order of the grid that much, Valtteri Bottas (Mercedes) had a better start than Verstappen and won for the for the second time a sprint race but would this time keep the pole position for Sunday’s Grand Prix as previously he had a engine penalty in Italy. While Hamilton was able to fight from last on the grid to P5 in the  race it was Carlos Sainz (Ferrari) who finished third, his best Sprint Qualifying result.

In the three Sprint races we had this year, 5 different drivers scored points by finishing in the top 3: Max Verstappen, Lewis Hamilton, Valtteri Bottas, Daniel Ricciardo (McLaren) and Carlos Sainz. 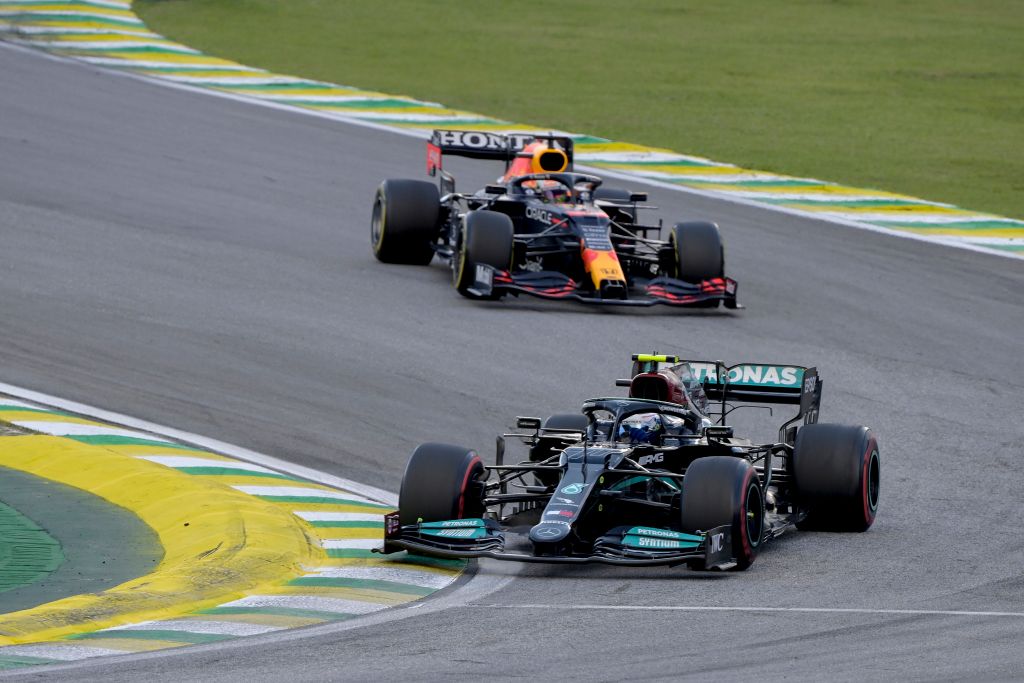 Starting Grid
Pole position went to Valtteri Bottas, his 20th from his F1 career bringing him to an equal amount of as Damon Hill or 14th in the all time list. Verstappen would line-up on the front row for 28th time, the same amount Riccardo Patrese achieved in his career from 1977 until 1993. Due to a penalty for an engine change, Hamilton had start the Grand Prix from P10. Tenth on the grid wasn’t Hamilton’s worst starting position in Brazil, in 2017 he started from P20 (Finished 4th) and in 2009 he started from P17 but did not finish the race. For the first time in George Russell’s (Williams) F1 career he was beaten by his teammate as Nicholas Latifi who not only beat him in Q1 by 0.036s, but he also finished ahead of Russell in the Sprint (P16 vs P17). 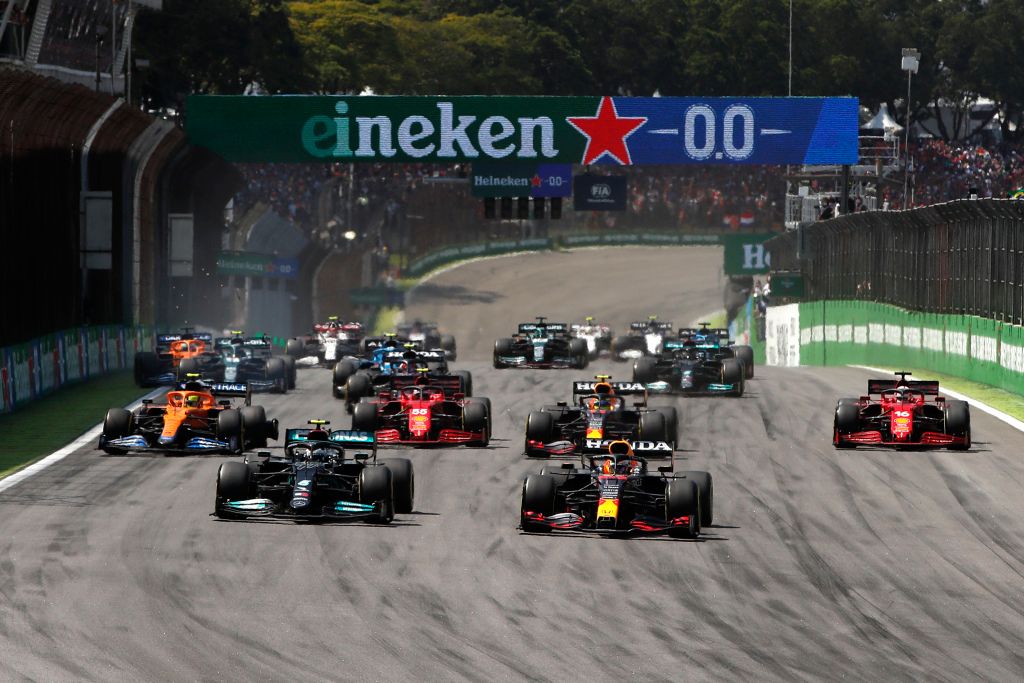 RACE
The Grand Prix itself was won by Hamilton, who after the start and 2 Safety cars, quickly moved through the field and by lap 5 he was already in third place. Hamilton won his sixth race of the season and his 101st from his F1 career, but he had to fight for it and only led 17 laps of the race while Verstappen, who finished second for the sixth time this year, led 51 laps. Hamilton’s win from P10 was the first time anyone had won from a grid place lower than P8 as Giancarlo Fisichella won in 2003 from P8 in a Jordan. 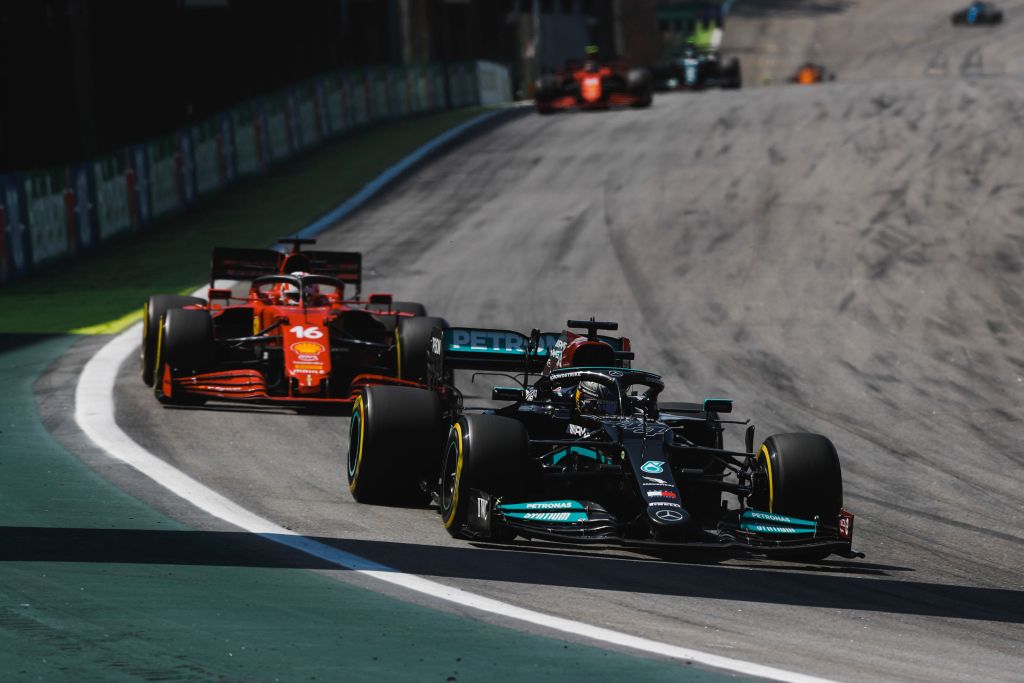 Bottas finished third, his eigth third place of 2021 and his 66th podium finish of his career. Sergio Perez (Red Bull) finished fourth and snatched the Fastest Lap away from Hamilton on the final lap of the race.

The Ferrari’s were clearly the third best team in Brazil with a P5 & P6, and collected important points for the constructors championship as McLaren scored only 1 point (Lando Norris P10).

Pierre Gasly finished seventh, the same position he had started from, but more important for his AlphaTauri Team are the points that go with that P7, as the Alpine drivers finished P8 & P9. With the 6 points collected by the Alpine drivers (Esteban Ocon and Fernando Alonso), Alpine and  AlphaTauri are now equal on points for the battle for P5 in the constructors championship.

Lando Norris scored the final point with P10 and with the retirement of Daniel Ricciardo on lap 49, McLaren has now scored 1 point in two races in a row; they also scored just 1 point at Zandvoort in the Netherlands.

With 3 races to go Verstappen leads the championship with 14 points, he won 9 races this year vs Hamilton 6. Whatever happens at the next round Qatar the championship battle will go on untill Saudi Arabia.