Mercedes driver Lucas Auer claimed victory in a dramatic opening race of the 2022 season at Portimao, taking advantage of a slow restart from polesitter Mirko Bortolotti. 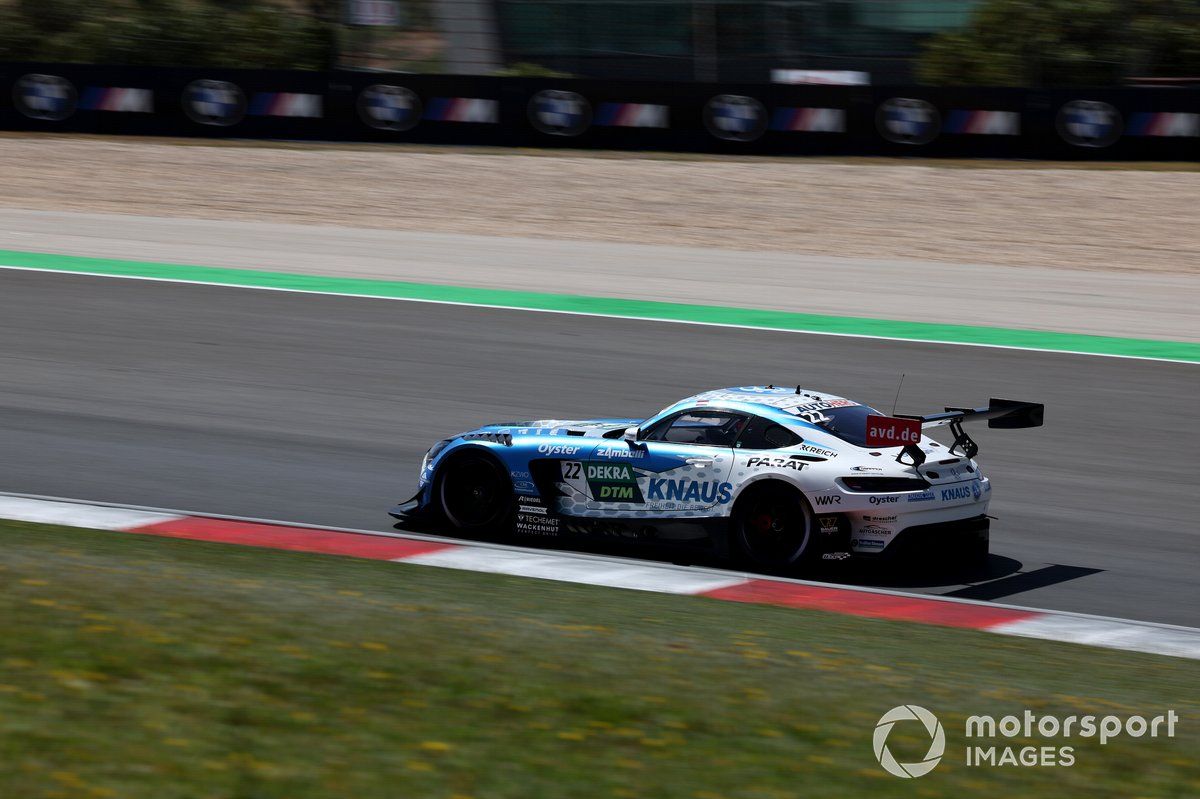 Factory Lamborghini driver Bortolotti led the first part of the race with ease from pole position, putting several seconds between himself and the chasing pack led by the Winward Mercedes of Auer.

But the race was turned on its head on lap 19 when Bortolotti’s Grasser Racing teammate Rolf Ineichen stopped on track at Turn 1 shortly after his pitstop, bringing out the safety car.

After a brief intervention period, Bortolotti's Lamborghini was simply slow to accelerate when the red lights went out and he tumbled down the order, allowing Auer to come through and take the lead of the race.

From there on, the Austrian was untouchable out front, clinching his eighth career victory in the DTM by just over a second.

HRT Mercedes driver Luca Stolz made rapid gains after an early pitstop on lap 8, finishing a strong second in his first DTM race as a full-timer.

Bortolotti recovered from his botched safety car restart to claim the final spot on the podium, repassing the GruppeM Mercedes of Maro Engel into Turn 1 on the very last lap of the race.

Engel was later hit with a five-second penalty for a pitstop infringement, dropping to 10th place in the final ranking.

This promoted last year’s title contender Kelvin van der Linde to fourth in the Abt Sportsline Audi, the South African recovering from a poor qualifying that left him 17th on the grid in the 29-car field.

Porsche drivers also showed improved race pace after struggling for pace in qualifying, with Dennis Olsen finishing a strong fifth for the SSR Performance team on the Stuttgart-based marque’s debut in the DTM, three places ahead of teammate Laurens Vanthoor.

Abt Audi’s Ricardo Feller was one of the few drivers to make a pitstop at the first opportunity on lap 6 and that allowed the reigning GT Masters champion to finish sixth on his DTM debut.

Schubert Motorsport’s Sheldon van der Linde piloted the new BMW M4 to a solid seventh place ahead of Vanthoor, while teammate Philipp Eng jumped from 24th on the grid to finish ninth on his DTM return.

The final points-paying position went to Engel after his five-second penalty, while reigning champion Maximilian Gotz(Winward Mercedes) could only manage 11th at the start of his title defence.

Aston Martin factory driver Nicki Thiim (T1 Motorsport Lamborghini) ran inside the top five for much of the race but was caught up in the melee at the restart, tumbling to a disappointing 12th in the final order.

The chaos at the restart also impacted Red Bull’s Felipe Fraga and three-time champion Rene Rast (Abt Audi), both retiring from the race immediately with damage to their cars. Fraga was running in seventh place and was hoping to take advantage of fresher tyres, having made his mandatory stop just a lap before the safety car was deployed.

Nico Muller (Team Rosberg) and Marco Wittmann (Walkenhorst BMW) were the other high-profile retirees from the race, both peeling into their respective garages early on with unrelated issues.

On his DTM debut as a replacement for Nick Cassidy, nine-time World Rally champion Sebastien Loeb was classified 16th in his AlphaTauri-sponsored Ferrari.

He finished less than a second behind front-row starter Thomas Greinier, who was running third behind Bortolotti and Auer before the restart only to slip outside of the points later.