Lewis Hamilton’s X44 team continued its unbeaten qualifying run by coming out on top in the qualifying heats at the Desert X-Prix, as the second season of Extreme E got underway. 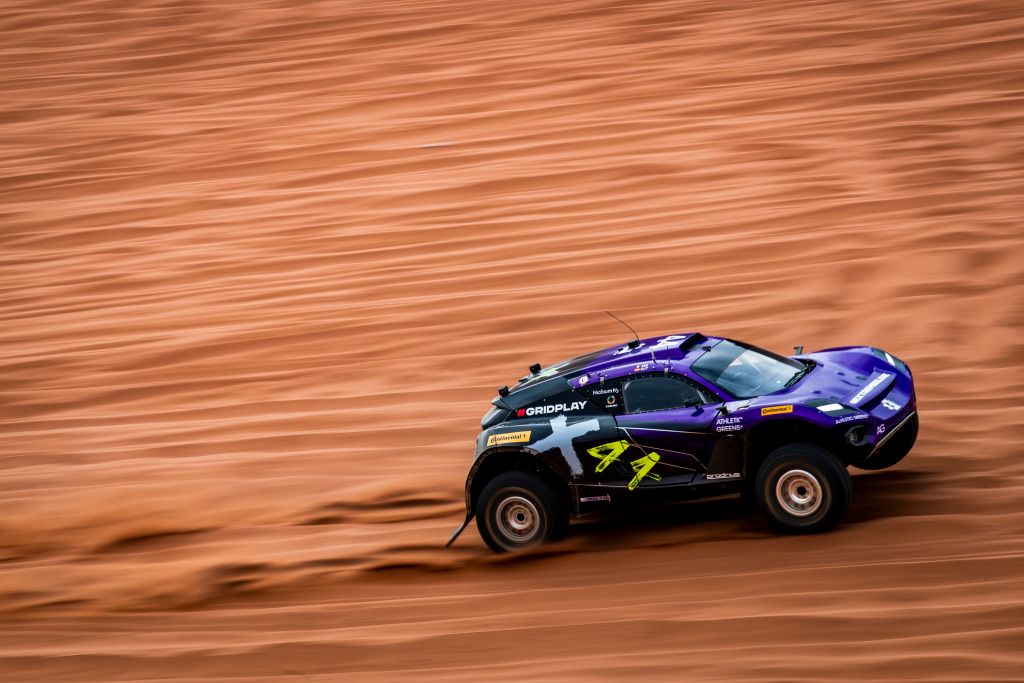 Rally legend Sebastian Loeb and Cristina Gutierrez took a comfortable victory in the faster of the two heats on the new Neom layout in Saudi Arabia, with Timmy Hansen and Catie Munnings triumphing in the other heat after a time penalty for defending champions Rosberg X Racing.

In a late format change, the starting order for the heats was determined by single-car sprints earlier in the day. Christine Giampaoli Zonca suffered a suspected fractured ankle during a heavy crash during the sprints, with damage to the car ruling Veloce Racing out of the heats.

The early runners in the sprints benefitted from heavy overnight rain, as the more compact sand made conditions faster. X44 knocked over half a minute of its benchmark time from Friday’s practice running, with Loeb exploring the limits through the downhill section.

But they were pipped to the fastest time by arch-rivals RXR with new signing Mikaela Åhlin-Kottulinsky maintaining a 6s advantage built by teammate Johan Kristoffersson.

Veloce had looked on course to beat RXR’s time during a committed run from its new pairing of Lance Wooldridge and Giampaoli Zonca, but the latter flipped the car on the downhill section, landing heavily and coming to rest upside down.

With Veloce missing, only four cars took part in heat one in the second round of qualifying. Loeb made the best start to lead for X44, and built a commanding advantage after a collision between the Acciona Sainz and Abt Cupra XE machines. Nassery Al-Attiyah made a move up the inside of Carlos Sainz Snr for second, but then ran wide and missed a gate before collecting the Spanish rally legend.

Sainz limped back to the switch zone before retiring the car, while car damage and a time penalty consigned Al-Attiyah and teammate Jutta Kleinschmidt to a distant third.

Gutierrez cruised to the heat win after taking over from Loeb for X44, 19.68s clear of Chip Ganassi Racing pair Sara Price and Kyle LeDuc

Hansen held off Tanner Foust to lead heat two for Andretti United, with the latter losing ground after getting airborne. Foust managed to close back in on the lead for debutants McLaren, with the top two nose-to-tail as they entered the switch-zone.

But a problem for Gilmore during the changeover cost McLaren dearly, consigning the team to a distant fifth, as Munnings rejoined with a 13s lead for Andretti over RXR.

After taking over from Ahlin-Kottulinsky, Kristoffersson eradicated the deficit to Munnings with a brilliant charge, and moved ahead within yards of the finish. But a 17s penalty for speeding in the switch zone demoted RXR to fourth.

Andretti took victory by 13.703s from Xite pairing Oliver Bennett and Tamara Molinaro, with Taylor and Hansen less than 2s behind for JBXE, having recovered from a damaged suspension in the earlier heats.